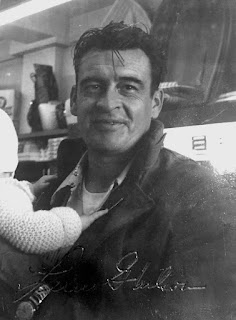 Lewis Gilbert Wilson (January 28, 1920 – August 9, 2000) graduated from Worcester Academy, a prestigious upper crust school in Worcester, Massachusetts in 1939.  His family had a long history with the school and he followed in the footsteps of his father and grandfather.
Born in New Hampshire he grew up in Littleton, Massachusetts where his father, John Henry Wilson, was the pastor for the First Unitarian Church from 1927-1945.

Wilson moved on to the Academy of Dramatic Arts in New York City at Carnegie Hall where he met his future wife Dana Natol.   Finding some success on Broadway Wilson was soon given a contract at Columbia Pictures Studio in California where he made his film debut in REDHEAD IN MANHATTAN (1943) where he was seventh billed.

His first starring role was as Bruce Wayne/Batman in THE BATMAN (1943) where he gave a very memorable performance as the Don Diego-like Philanthropist who adopts a secret identity to battle crime.   At 23 years old he is the youngest actor to date to play the role, and he comes across as much older.   He demonstrated real acting skills in a very Tyrone Power like performance but World War II stalled his career as he was drafted and sent to Europe where he participated in the Battle of the Bulge.

Returning after the war, he found roles hard to come by and appeared in a few minor roles but nothing that showed off his ability.    He turned to television to play the hard boiled reporter friend of CRAIG KENNEDY,  CRIMINOLOGIST as played by Donald Woods but when the show was cancelled after 26 episodes Wilson found himself again in bottom feeder roles.

He finished out his acting career (and his first marriage) with BOWANGA BOWANGA with his wife.  A cheap jungle exploit film which played poverty row theaters.   Dana Wilson remarried shortly after to Cubby Broccoli who would produce the James Bond films in the 1960s.   Michael Wilson, Lewis' first son, was adopted by Cubby and today he serves as the Executive Producer of the current Bond series.

Wilson's final appearance in a film was as a 25 second cameo as a Border Patrol Dispatcher in 1954's NAKED ALIBI, a film noir thriller starring Sterling Hayden and an overly hammy Gene Barry in a role that seemed more suited for Wilson.   With that film wrapped Wilson retired from show business and focused on a career at General Foods while raising a new family in Northern California.

In 1966 Wilson did a rare interview and was asked his thoughts on the new Batman TV series which starred Adam West;

Wilson was asked by the interviewer if he'd be interested in playing a villain on the show;

Wilson, always one to have a sense of humor told of talking to his kids about Batman which they watched each week on ABC.

"I ask them if they want the original Batman's autograph, and they say they'll take it on a check!"

Wilson passed away in 2000 in San Francisco, living out his last years out of the limelight, declining offers to make appearances at Sci Fi and Comic Book Conventions where he could have interacted with his fans.

In the end, maybe he never got to play Hamlet, but he remains a firm point in pop culture relevance.