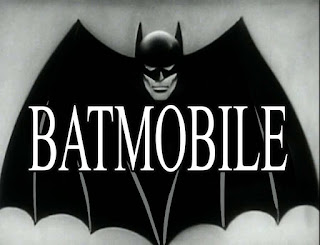 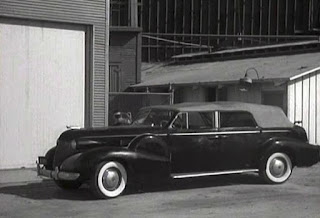 Okay, to be fair, there is no Batmobile in the serial.  It's never referred to as such and in reality it's a 1939 Cadillac 61 Convertible-- a suitable car (limo actually) for a wealthy Gothamite.  Top up Batman's riding in it, top down Bruce Wayne is.     It's one of the biggest complaints among comic fans who watch the serial and it's justified when we consider the sleek Batmobile appearing in comics of the time; 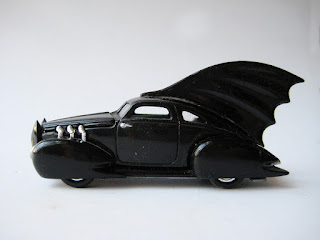 First introduced in 1941 The Batmobile was a powerful roadster with fuel injection and a sweet Batwing along the back.  It's a shame the serial producers didn't at least give this a try.  Other serials of the period made an effort to build cars associated with their character leads, most notably in Universal's THE GREEN HORNET (1939) and Columbia's own JACK ARMSTRONG (1942).  But if one researches the comics of the period there may be an explanation for such an omission.

In Detective Comics #48 Feb 1941 we hear the term BATMOBILE for the first time.  Kept in a barn behind Wayne Manor, it's a Red 1936 Convertible Cord Speedster (with possibly a Bat emblem as the hood ornament-- it's hard to tell).

The producers of THE BATMAN (as the serial was called) were looking at early issues of Batman and Detective Comics for inspiration and it may very well be that they were unaware that there was a Batmobile with a sleeker design.