AN EVENING WITH BATMAN AND ROBIN 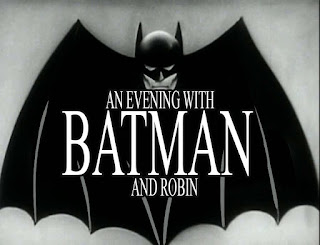 In July 1965 Hugh Hefner's Playboy Club Theater in Chicago started showing daily episodes of the 1943 Batman and Robin serial in between features and the response was so positive they decided to run the entire serial one Saturday night from 12 Midnight until 4:45am and the theater sold out-- and did banner concession stand sales too.

Columbia Pictures got wind of this and put together a package of the entire serial along with marketing materials and sent it out to College Town theaters and Art Houses. 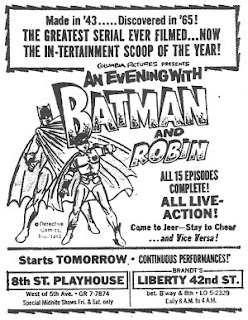 The success was repeated all over the country with some theaters showing around the clock screenings to packed houses.

Other venues booked it for just one night but they still found great box office success.   In some cities the weekend showings during matinees were overrun with school age children then would be filled with film buffs and beatniks who would come to laugh at the "corny" fashion and the silly plot twists. 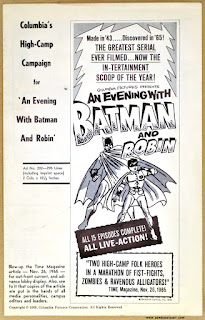 The Pressbook Columbia sent out included articles and images that could be reprinted for news media outlets and also offered ideas for theater managers to promote at the event, like printing out pages and illustrations to color, or offering model kits in the lobby. 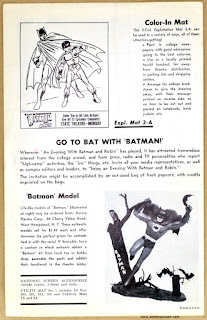 Rumors persist that the showings inspired ABC to make the Batman TV series with Adam West, but that project had already been in the works by the time of the showings.   Whether the second Batman serial from 1949 was ever packaged remains unclear with rumors of it based mostly on faulty memories.


I do know that in the 1970s a Burger King in my area (Central Massachusetts) showed the 1949 Serial with a projector and screen in it's dining room during their grand opening campaign. 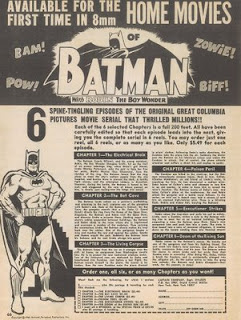 In the era before Home Video Columbia packaged the 1943 serial as edited down 6 chapter volumes on Super 8mm film which were offered for sale in the back pages of Warren Publishing Magazines (they produced FAMOUS MONSTERS and other popular titles).

AN EVENING WITH BATMAN AND ROBIN has been released on DVD on a black market set but there seems little sense in a commercial release since the entire serial has already been released.