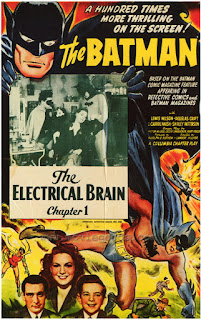 1943 One Sheet THE BATMAN
One Sheet's were 27"x41" and usually shipped to theaters folded.
The BATMAN serial had a different one sheet for each chapter but the only change would be the center image advertising the Chapter Title and the Photograph that sometimes went with it.  In the Chapter 1 example for instance, the image is actually from Chapter 15 of the serial. 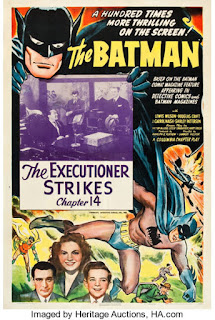 While this example from Chapter 14 features an image from Chapter 1 of the serial, so there was no rhyme or reason to the placement of images other than they were a different image.

The changeable images were permanent to the poster-- meaning Theater owners didn't just change the smaller image out, they changed the whole poster.  Poster's were cheap at the time (sometimes free to larger or house chains) and not designed to hold up to the rigors of a theater lobby for 15 weeks. 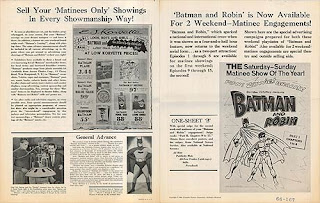 Poster's were ordered by Theater Managers through Pressbooks which also had images they could use for newspaper advertisements as well as pre-written blurbs that could run in small town newspapers to promote the serial.   The above Pressbook is for 1965's AN EVENING WITH BATMAN AND ROBIN which was a special engagement Columbia put together to re-release the serial as a complete four hour adventure. 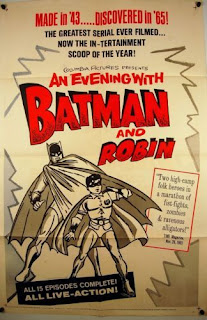 Three sheet from my personal collection advertising the event "Made in '43...discovered in '65" -- the showing of the Batman Serial in this manner pre-dates the Adam West TV Show and was often sold out at theaters hosting the event. 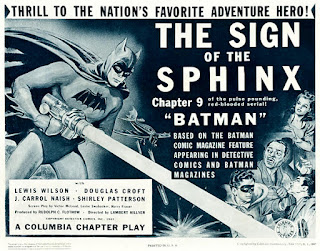 Lobby Cards were also prominently displayed near the popcorn stands to build excitement for the film you were about to see.  Measuring 11x14 on heavy cardstock Lobby Cards continued into the 90s before film companies stopped making them.

Some featured artwork as see above, other's featured stills from the film; 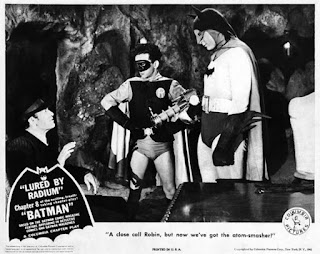 Lobby cards were produced in full color, black and white or in sepia tones.  Lobby Cards would either be for a particular episode or they might just feature a Title Card which could run over the course of the 15 weeks a serial was shown. 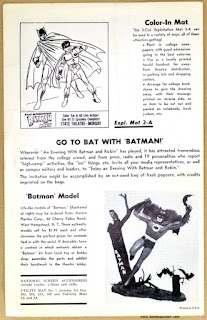 Many of the pressbooks offered suggestions for events to promote the upcoming film and suggested merchandise tie ins like in the one above from 1965 which pushes the idea of creating a coloring sheet and selling Aurora Model Kits of BATMAN during the intermission at the concession stands. 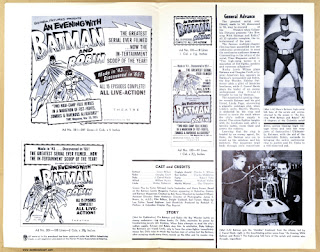 The pressbook would also feature bios of the actors and stills from the film that could be used in newspaper articles. 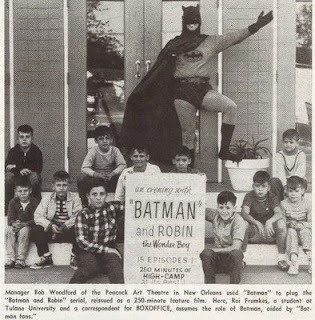 Some creative Theater Managers would get a Bally Batman-- a guy to dress up in a Batman Costume to promote the film during it's showing.  This would often result in additional publicity for the Theater. 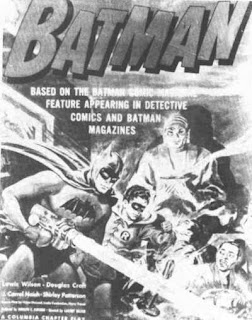 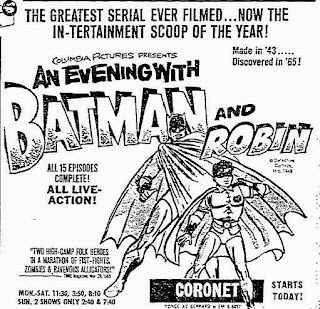 From this newspaper ad in 1965 you can see that the Coronet Theater was showing the serial around the clock. 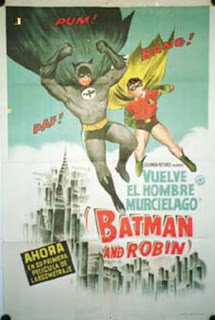 Spanish Poster for the event which ran overseas in 1966. 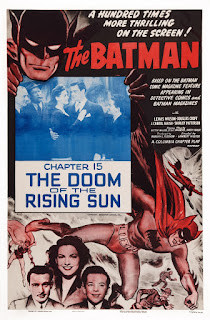 The First Re-Release for THE BATMAN was in 1954, five years after NEW ADVENTURES OF BATMAN AND ROBIN was released and eleven years after its original run.  The posters for the re-release were virtual re-do's of the original but in a limited red tone.  The reproduction was slightly shoddy, giving Lewis Wilson (bottom left) the appearance of having a mustache.