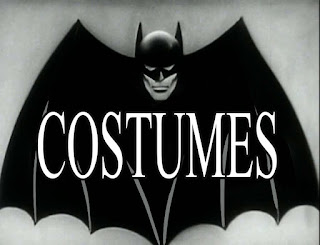 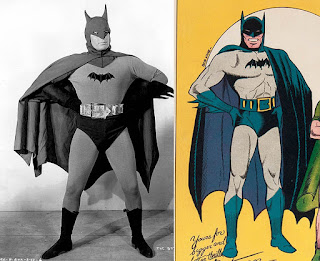 BATMAN
Difficult as it is to translate a 2D drawing into live action, the costumers for Columbia did an admirable job in creating suits that looked much like the characters appearing in the comics at the time.

Lewis Wilson is often discounted as being portly and that's false-- an athlete and a swimmer at the time he carried his weight well.  The belt positioning occasionally rode up giving his mid section the appearance of girth.   It didn't help that his stuntman had a few extra pounds on him.

The Devil's Horns of the cowl as they are often called do match the drawings of the period and offered a solution to keep them visible from all angles. 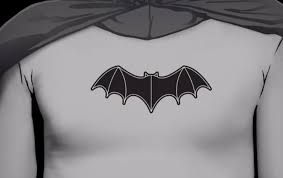 The chest emblem shows delicate craftsmanship and the utility belt, which wasn't used at all in the serial is a very good representation of what it looked like in the comics.  To be fair, in the comics of the period Batman only used his belt occasionally and it wasn't the problem solver it would become in the 1966 TV series. 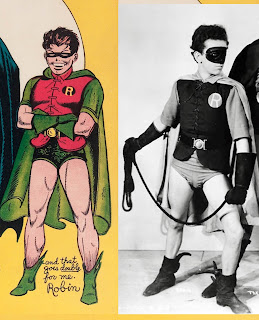 ROBIN
Doug Croft's Robin costume is equally successful with the exception of the cheap dime store Halloween mask.  Care was made to match the look of the belt buckle and the Robin Hood flair of his boots.