Was The Joker Originally In The 1943 Serial? 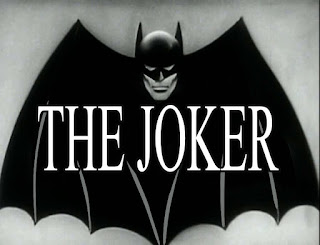 Rumors persist that The Joker was the intended villain for the serial but that National Comics objected to the script which called for him to be the head of a fifth column spy ring operating out of a carnival sideshow so at the last minute the character was changed to Japanese Spy leader with the unwieldy name of Prince Doctor Tito Daka played by J. Carrol Naish.

Initial posters worked up for the serial clearly show Batman punching The Joker.  Was the Clown Prince of Crime originally planned as Batman's antagonist for the serial?

The first draft for the script was dated October 1942-- the script itself is massive, like a phone book, so it took some time to write it.  The first mention of BATMAN as a serial at Columbia was in the trade papers sometime late in 1942 but the cast wasn't announced until the following May.  While Shirley Patterson was announced a few weeks earlier, Lewis Wilson was mentioned at the end of May 1943 as being cast in the lead.

Filming took place in under 30 days but there are very few surviving records.  Artwork would have been commissioned fairly early on but the fact that both Wilson and Naish are mentioned in the banner above which features The Joker would indicate that the was a last minute change in plans.

Naish's makeup and costume as the Japanese spy wasn't that far removed from the look of The Joker from his first appearance in BATMAN COMICS #1 in Spring 1940.   His face was lightened and his features emphasized-- the mustache is the only thing that betrays his physical look for the character (shades of Cesar Romero?).   In the script the character is described as being sharply dressed in a morning coat and tie with striped pants.  Very Joker-ish.

So what's the final verdict?   We can't say for sure until a call sheet or additional proof appears, but to me I'd say it looks very likely to be the case.  That is clearly The Joker in that banner.